When the Metropolitan Museum of Art reopened its European Galleries in 2013 after its first major renovation and reinstallation since 1951 the response was wildly enthusiastic. The Met increased the space that houses its collection of European Old Master paintings by almost one third to accommodate more than seven hundred paintings in forty-five galleries.

Publications such as the New Yorker called the renovation “monumental” and “a marvelous feat of storytelling installation”.  Lowy, we are proud to say, made significant contributions to this celebrated accomplishment. In fact, Lowy’s handiwork greets visitors at the Met’s door. Some years ago, Lowy reframed the three irregularly-shaped Tiepolo canvases—magnificent works from the Venetian palace of the Dolfin family—that hang at the top of the Grand Staircase, immediately outside the impressive entrance to the European Galleries.

During the massive renovation, Lowy’s long-standing relationship with the Met prompted the museum’s curators and conservators to come to us with a variety of framing requests, as well as some of their most challenging framing problems. As they learned from our past collaborations, our expert artisans were up to every task.

Lowy created two reproduction 18th-century Italian frames for Ruben’s
Venus and Adonis and his Madonna and Child with St. Francis, and copied a 2½”-wide Italian receding oval molding to match our work on a Tiepolo we had framed several years earlier. We also provided a rare, antique 17th- century carved and gilt Italian frame for Ruben’s 1612-14 Portrait of a Commander Being Dressed for Battle, and a 17th-century Spanish ebonized frame with receding panel and gilt scrolling corners for van Laer’s 1638 painting, Self-Portrait as a Sorcerer.

The Annunciation, Pietro Candido, ca. 1585, oil on wood, 91 ¼” x 68 ¼”, during restoration at the Metropolitan Museum of Art, wearing its custom warped frame, crafted by Lowy.

Candido’s The Annunciation after restoration

One interesting project involved creating moldings for a double sided painting on canvas dating from around 1400. Originally commissioned as a processional banner painted by Spinello Aretino, the work depicted Mary Magdalene holding a crucifix on one side and the flagellation of Christ on the other. Lowy was asked to reproduce molding in a finish that would simulate the centuries-old look of the piece.

We believe in working with the past, so we welcomed the unusual assignment of creating a warped frame for Candido’s The Annunciation. The 1584 panel painting, measuring a substantial 91 ¼” x 68 ¼”, had warped significantly over the centuries, and the Met’s Painting Conservator, George
Bisacca, asked Lowy to create a gilded frame to accommodate that warp.

The process was complicated and involved a number of precise steps. Working from exact tracings of the warp, Lowy’s Master Gilder R. Wayne Reynolds matched the warp of the panel, as well as a front molding that would attach to the backframe. Then the backframe was taken to the Met so the fit could be approved.

The frame then came back to Lowy to be gessoed in preparation for gilding, which took weeks—and over a thousand sheets of 23 karat gold leaf—to accomplish. The completed frame then went back to the Met for test-fitting and, after minor adjustments, was patinated to harmonize with the tonality of the painting. Once the work was completely restored by the Met’s conservators, the frame was fitted to the painting one final time and Candido’s The Annunciation, warped frame and all, became a focal point of the museum’s European Galleries.

When visitors enter the renovated space and admire the subtle grey , wall colors, the enhanced lighting, and the inspired display, we’d like to think that, even subliminally, they notice our contributions, great Lowy frames supporting great works of art 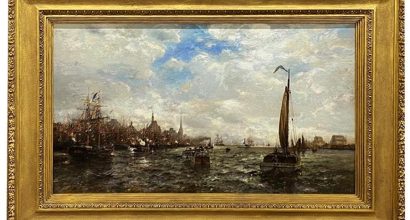