The Illusive Eye, currently on view at El Museo Del Barrio in New York till May 21st, welcomes the spectator to a kaleidoscopic panorama of geometric abstraction that engages, entices and challenges. Encompassing several decades, and a broad range of artists working in diverse mediums and formats (painting, sculpture, film and installation) this exhibit puts forward a visual delight; a perfect marriage of form and content, symmetrical shapes and the pursuit of design for its own sake (devoid of external sources). Arranged in concise groups that differentiate the varied approaches to Op Art, some pieces possess an austere solemnity, as in the case of Optical Sublime with its flat repetitive shapes and monochromatic palette, whilst others display a witty playfulness bursting with kinetic energy complete with moving parts and dangling wires, such The Parallax and Cascades. 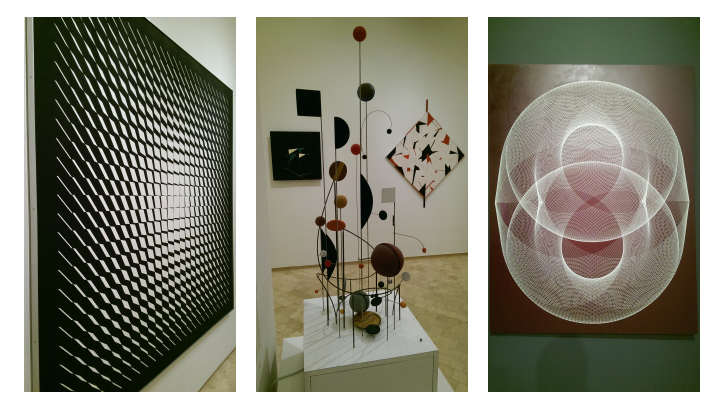 This exhibition is particularly significant to the Lowy Conservation Department due to our close working relationship with MACBA (Collection-Museo Arte Contemporaneo de Buenos Aires) and its Executive Director Aldo Rubino. Mr. Rubino’s institution and personal collection played a primary role in the contribution and realization of this exhibit. His passion and dedication to geometric abstraction has been a driving force internationally for the successful re-introduction of this genre. 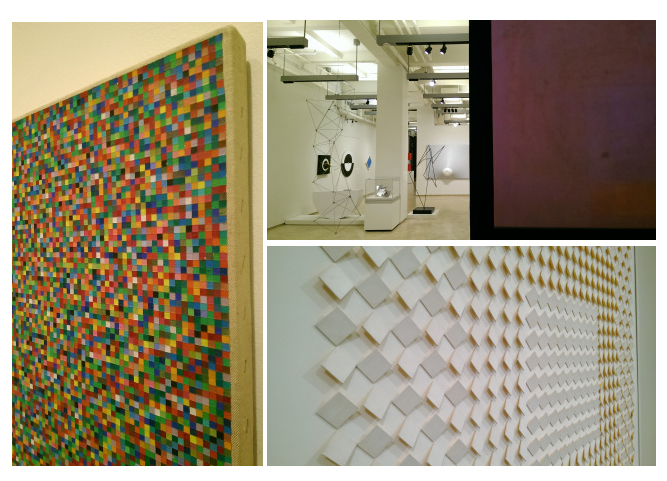 Geometric Abstraction took the spotlight in a 1965, when The MoMa debutedThe Responsive Eye; an exhibition which celebrated works of art that used illusion and other optical devices to invite the viewer to engage in a purely subjective experience, which was entirely real to the naked eye even though it did not exist physically in the work itself. The materials used to create these works were almost as new to the art world as the concept behind the movement. Many of these paintings incorporated the use of acrylic paint which was introduced in the 1950’s, though modern high-viscosity acrylic paint was not commercially available until the early 1960’s. With the advent of this new media came new challenges for the science of conservation. Many unknowns still remain when it comes to the long term effects of physical treatments on acrylic paintings. Methods of cleaning have been studied and scrutinized, though not enough time has passed to truly understand the effects of these treatments on the degradation of the paint itself. Preventative conservation still remains as the best course of action when possible. It has been Lowy’s great privilege to care for many of the works in this exhibit. We are thankful to be a small part of something so spectacular.
The Illusive Eye: An International Inquiry on Kinetic and Op Art, is on view at El Museo del Barrio from now until May 21, 2016.