Currently on view in The Frick Collection’s Cabinet Gallery are two Netherlandish masterpieces from the late Middle Ages commissioned by the monk Jan Vos for the Carthusian monastery of Bruges. The paintings by two of Bruges most important artists are reunited at the Frick and presented with a selection of Carthusian objects to provide a rich context in this extremely engaging exhibition.

Lowy was delighted to have had the opportunity to collaborate with Joseph Godla, Chief Conservator of The Frick Collection, in creating a frame for one of the two paintings, Virgin and child with St. Barbara, St. Elizabeth, and Jan Vos by Jan van Eyck and his workshop, which dates from 1441 and is a part of the Frick’s permanent collection. Our aim was to provide an aesthetically pleasing and historically appropriate setting for the painting that is consistent with the type of frames that van Eyck was known to have used.

We constructed the frame from walnut using a variant of the slotted joint fit with wooden pegs appropriate for frames from this time period. The molding chosen was a simple linear frame with frieze and scotia painted in faux-marbre with a gilded front finished by Lowy gilder, Luciana Torres. Marbleized finishes were more commonly used in the Netherlands than in France or Italy in the 15th century and were often the only decoration on the frames. Marbleized moldings, painted to simulate red marble with dark veins, were often used by van Eyck to frame his altarpieces.

“I have tackled many challenging framing projects for Lowy, restoring and reproducing frames dating from the 16th through the 20th centuries,” says Torres. “However, to faithfully replicate the surface and patina of a 15th century cassetta frame for such an important painting and for such a prestigious institution as the Frick was an especially rewarding experience for me.”

The raw walnut frame and a close up of the frame in gesso. 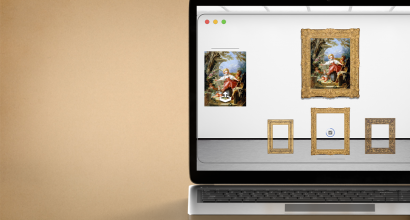 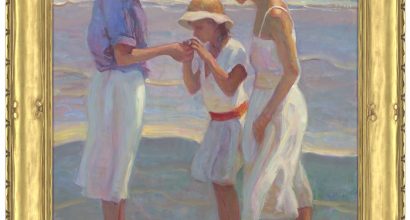 The Art of a Carrig-Rohane Reproduction American Frame