A self-portrait of Frida and her pet monkey, Fulang-Chang and I, was shown in an exhibition at the Julien Levy Gallery in New York in 1938. The painting had a unique presentation when it was shown, it had been fit into a mirrored frame with extended corners and panels of reverse painted glass with a foliate design selected by Frida. Fulang-Chang and I is now in the permanent collection of The Museum of Modern Art and it is frequently on view along with a separate framed mirror which was made in the same style as the original frame Frida chose for the painting. The separate mirror was added sometime after the 1938 exhibition. Frida had gifted this painting to her close friend, Mary Schapiro, along with the mirror so that the two friends could always be together. Her friend could look in the mirror whenever she chose and see herself side by side with Frida. Today the painting and mirror are a popular ‘selfie’ destination at MOMA. 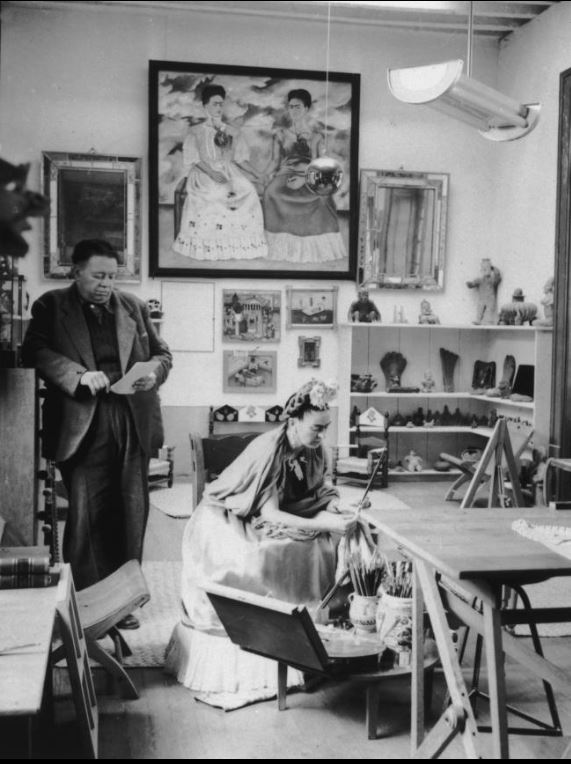 We have not yet been able to discover the exact origin of these eglomise mirror frames. Another self-portrait by Frida from 1938 which was painted on an aluminum plate, The Frame, was also surrounded by a reverse painted glass frame; it is believed that she purchased this frame in Oaxaca, Mexico. She was passionate about Mexican handicrafts and proudly displayed her Mexicanidad or Mexican nationalism. Mirrors were also very important to Frida after her accident. She used one on her bed so that she could paint while recuperating and there were many mirrors throughout her home, including several with reverse painted glass frames which can be seen in images of her home. There is a collection of reverse painted glass made using tinfoil or tin as a backing by itinerant artisans in the Folklore Center of the historic town of Magdalena de Kino in north western Mexico; many of these pieces were made for holy pictures and were displayed in the annual San Francisco Festival.
The frames used for Fulang-Chang and I were made by joining separate pieces of mirror and reverse painted glass with strips of lead or solder. The design was made using a version of the historic verre eglomise technique. In this process, either a design is scratched away from the reverse painted side of glass and then gilded over creating a mirror-like surface or the design is scratched into the gilding and then painted with colored pigments. The technique dates to the pre-Roman era and it has been revived multiple times since then in many European countries as well as in China and the United States. In mid-18th century France, the term verre eglomise referred to the work of a French picture framer to Louis XVI, Jean-Baptiste Glomy; he used the technique to decorate print and mirror frames as well as trumeau mirrors for Marie-Antoinette. In the 20th century, the technique was used by the artist Jean Dupas to create Art Deco Panels. 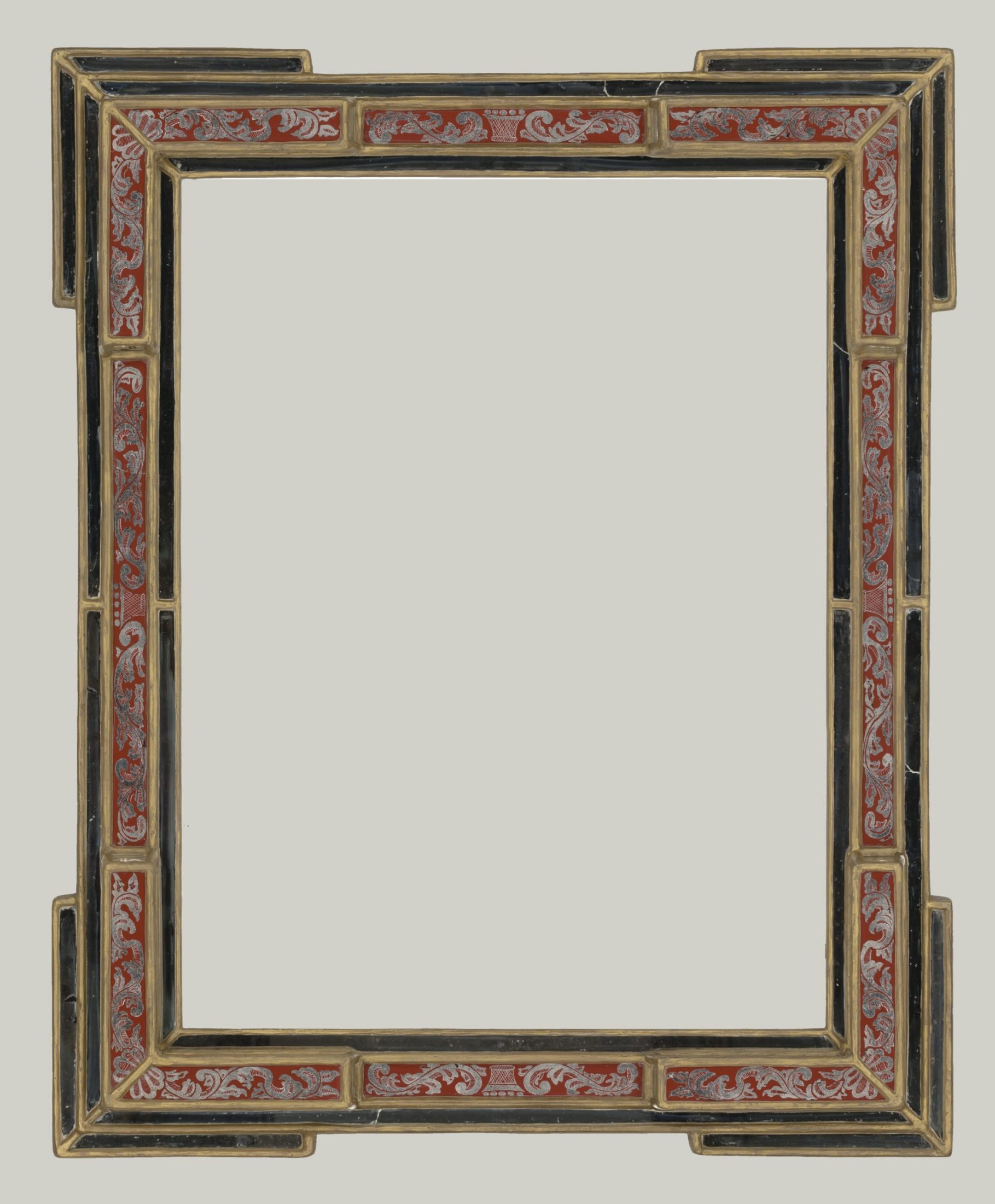 Luciana Torres, a gilder at Lowy, carefully studied Frida’s reverse painted glass frames at MOMA and created a reproduction using similar techniques. First a wood substrate was created. Narrow panels of reproduction antique mirror were then cut for the inner and outer borders; breaks in the mirror were reproduced to simulate damages the original frame. Glass pieces were cut for the central panels and painted on the reverse with a red pigment. A design transfer of the original foliate design was made on transparent paper which was used in reverse as a guide for creating the new design. The drawing was then scratched into the paint using a hard wood tool in a somewhat freehand manner altering the design as needed to accommodate the new dimensions of the reproduction frame but respecting the integrity of the original. An antique wash was applied, and the painted side of the glass strips were gilded over using 6 karat gold leaf and sealed with a protective enamel coating. The reverse painted glass strips and the mirror strips were glued to the wood substrate and sections were connected using a type of putty which was toned with mica. 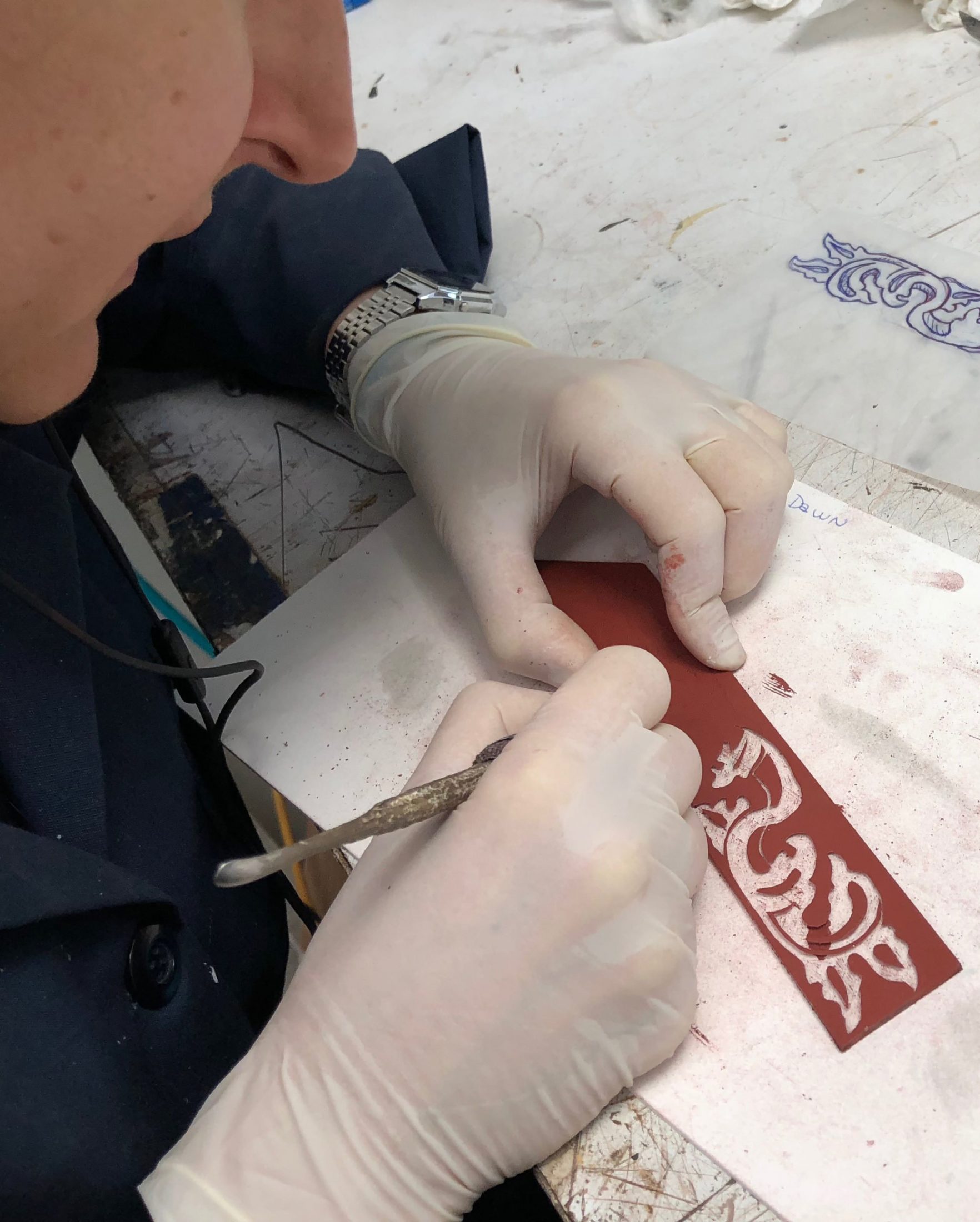 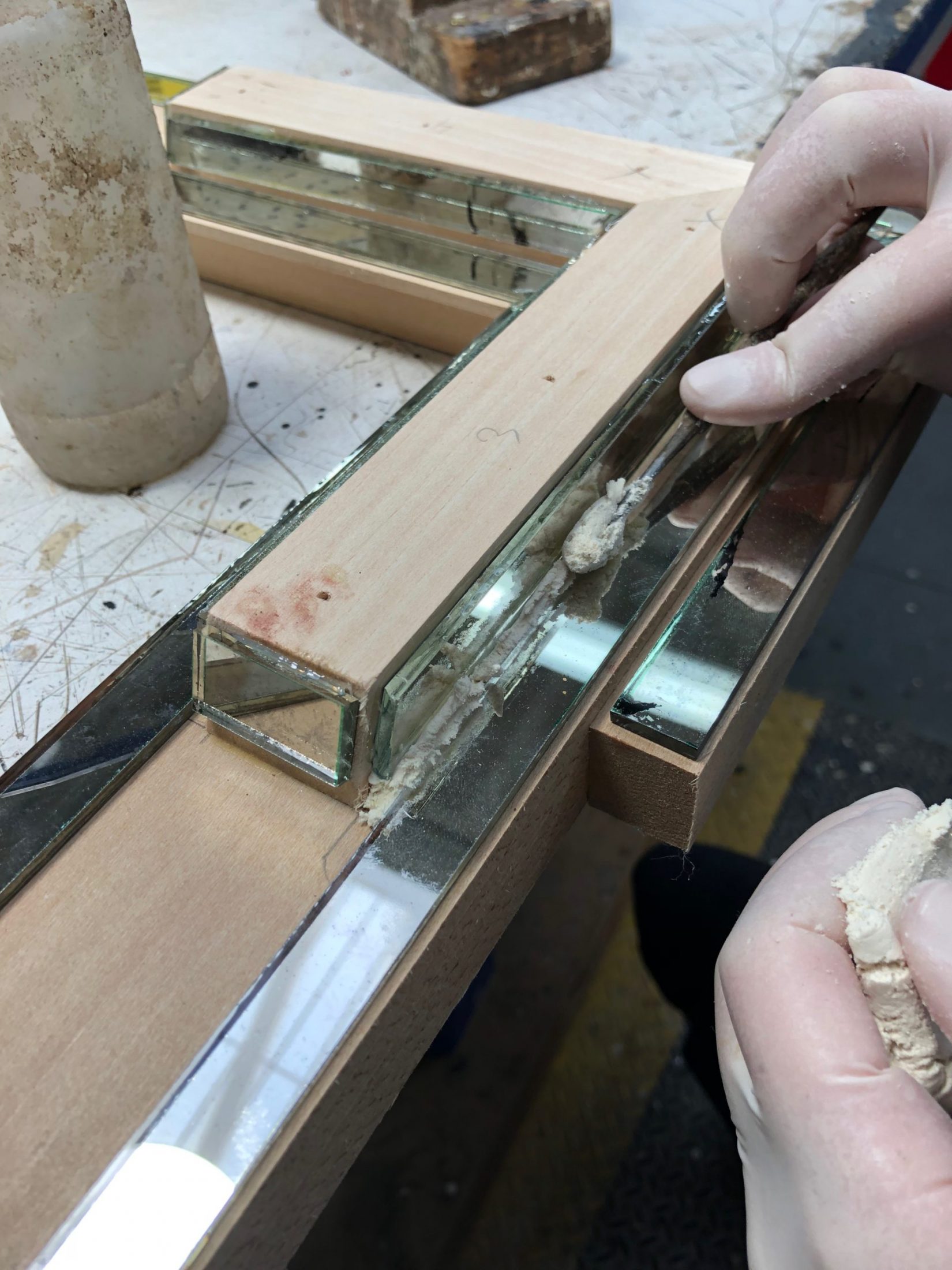 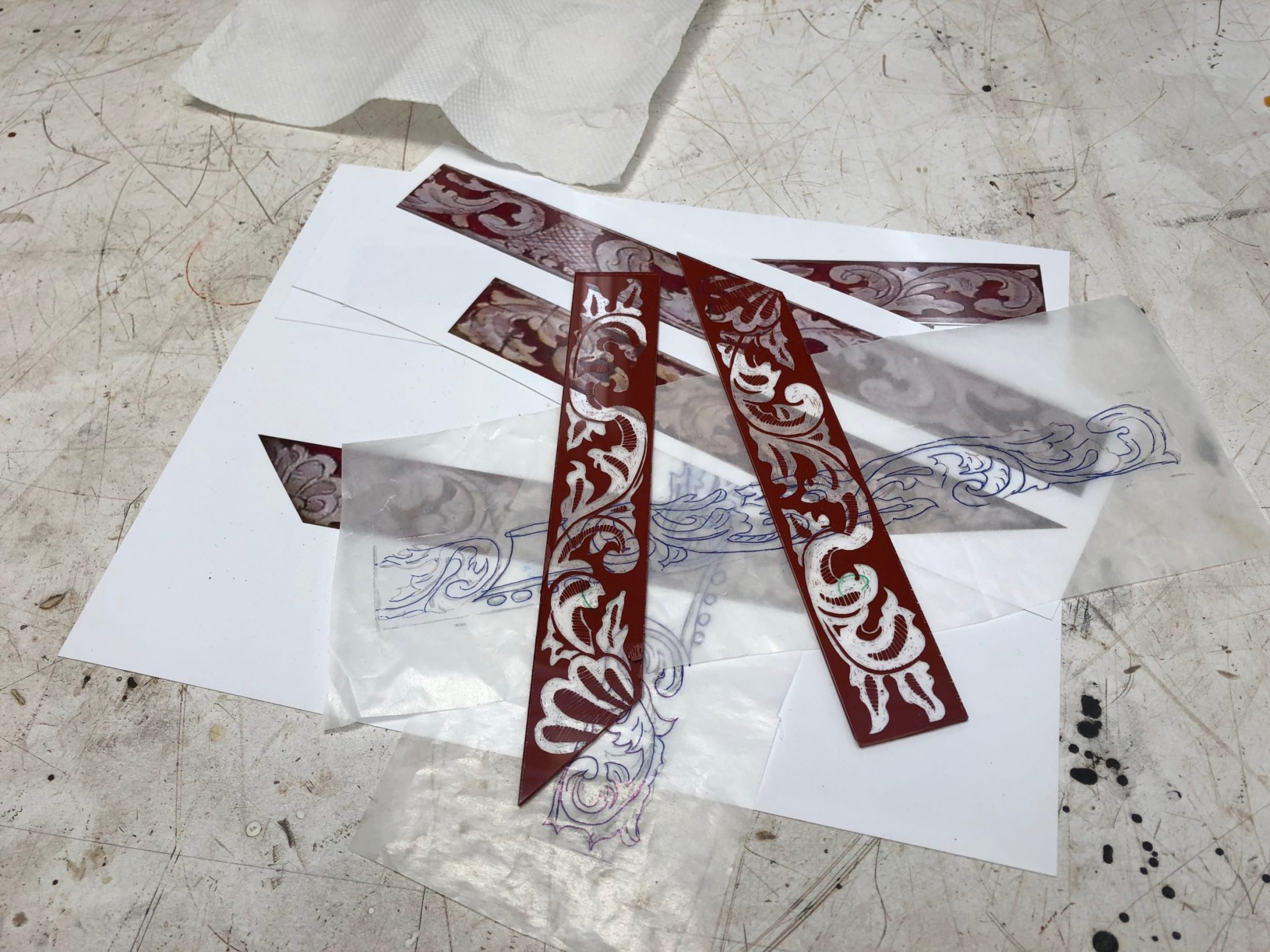 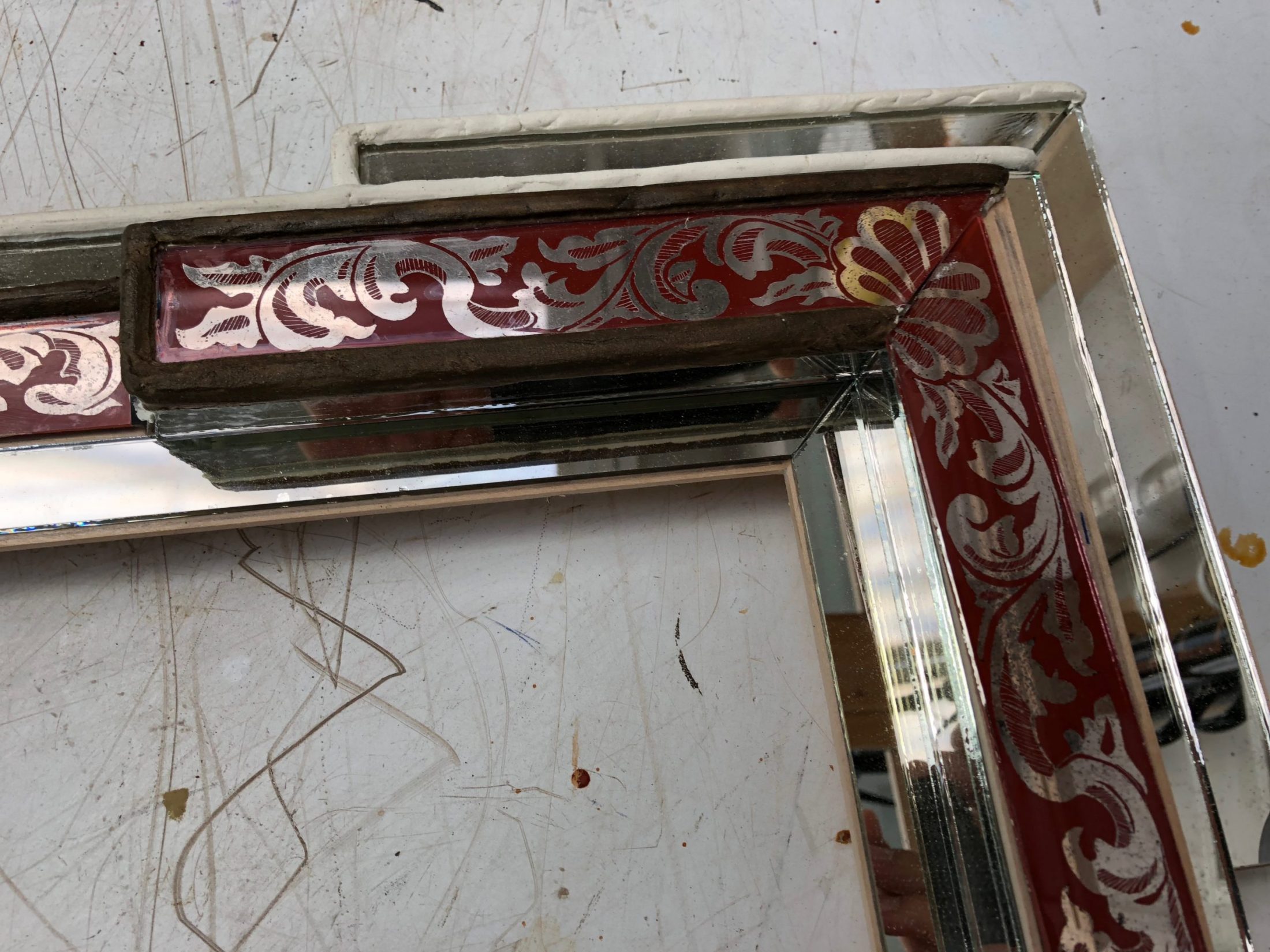 This project was a unique undertaking for Luciana. Some of the techniques were the same used in sgraffito (“to scratch” in Italian or estofado in Spanish) which she has used extensively in reproducing Italian and Spanish antique frames. But more creativity was required. “I enjoyed solving the challenges of recreating Frida’s frame and interpreting the design.” She has gone on to create a more contemporary version of the frame with a simpler, cleaner, and crisper design which a client very successfully used for a mirror. 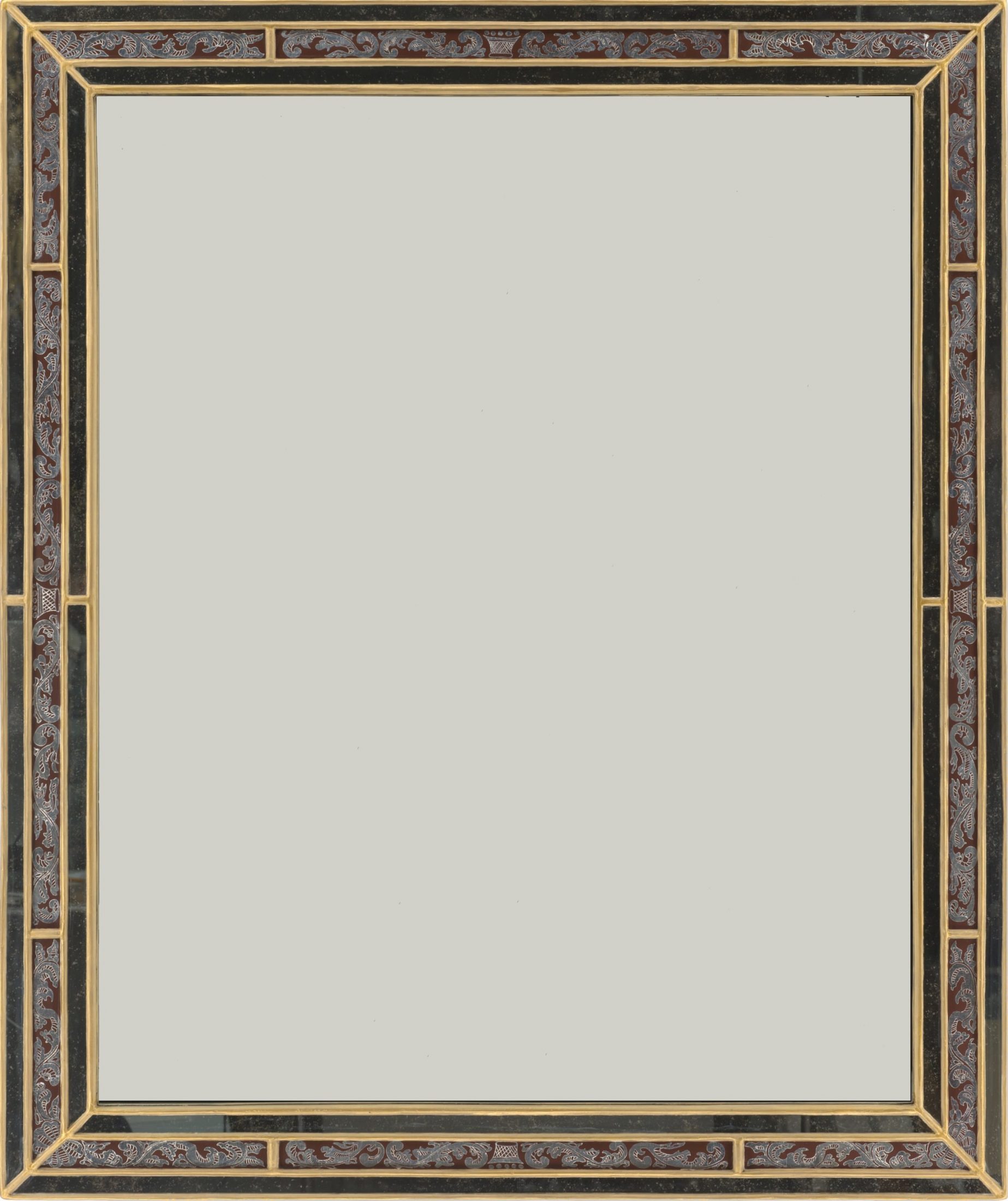