Sotheby’s and MGM Resorts is presenting a historic auction of eleven significant works by Picasso live from the Bellagio Hotel & Casino on Saturday, October 23rd; all were until recently on display in the Bellagio’s acclaimed Picasso Restaurant in Las Vegas, NV.

Picasso: Masterworks from the MGM Resorts Fine Art Collection is the first-ever major fine art exhibition to take place in Las Vegas; it will be live-streamed and coincides with the 140th birthday of Pablo Picasso. 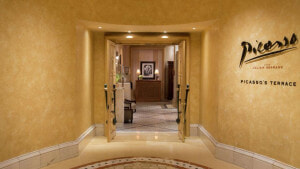 The Picasso Restaurant is a Michelin star restaurant that has won numerous awards and accolades and is considered one of the finest in the United States for lovers of fine art, fine wine, and fine dining.

Executive Chef Julian Serrano’s menu is inspired by the regional Spanish and French cuisine where Picasso spent most of his life. The masterwork Picasso paintings have long contributed to the fame and mystique of the Picasso Restaurant where they have been featured since its opening in 1998.

A highlight of the auction at the Bellagio Las Vegas is Homme et Enfant,  76 3/4 x 51 1/8″, one of the largest paintings that Picasso ever made and an impressive example of the final period of his career.

Painted in 1969, Homme et Enfant powerfully depicts the artist’s struggle with old age. The presale estimate for the painting is $20 – $30 million.

A little back story that few people know – Lowy was privileged to be asked to frame Homme et Enfant when it was purchased in 1999 to hang in the Picasso Restaurant.

The team here at Lowy selected a monumental antique hand-carved and gilt 17th-century frame to complement the strength and drama of the painting.