Norman Rockwell’s "Lazy Bones" when it arrived at Lowy. Two small cleaning tests are visible.
Every painting that comes to Lowy has a story, but we think the tale of this long-lost
Norman Rockwell is particularly engaging!
In 1919, when artist and illustrator Norman Rockwell was twenty-five- years old and
starting out on his legendary career, he painted a whimsical cover for The Saturday Evening
Post. “Lazy Bones” depicted a chubby adolescent boy playing hooky from his gardening chores —
his eyes closed, his mouth slack, his faithful dog asleep on his thigh, and his straw hat and hoe
tossed aside while he naps.
The painting (not considered valuable at the time) hung in a New Jersey man’s recreation
room…until the fateful day in the early 1950s when Robert Grant came over to play pool. Grant
inadvertently tore the Rockwell with his cue stick and ended up paying his friend between $50
and $100 dollars for the damaged painting, which he happily hung in his home.
“Lazy Bones” became a Grant family treasure, but the sleeping adolescent’s adventures
were far from over. In 1976, burglars broke into the house and stole a television, a coin
collection, and the Rockwell. They left no clues and the Grants despaired at ever finding their
beloved painting.
Forty years later, the Grants told their story to an FBI agent who specialized in art theft.
The agency issued a press release on the anniversary of the robbery, and it caught the attention of
an antiques dealer who had what he thought was a damaged Rockwell reproduction hanging in
his kitchen. He delivered “Lazy Bones” to the FBI and, miraculously, the long-lost painting was
reunited with the Grant family. They knew it was their painting when they saw the pool cue hole
that had never been repaired.
Ironically, that lazy boy had been busy increasing in value over the years. Robert Grant’s
“you-break- it, you-take- it” rec room acquisition was now worth well over a million dollars and
ready to make its debut at the Norman Rockwell museum in Stockbridge, MA, where it will live for the
summer before being sold at the renowned Heritage Auction House in the fall. The sale will take place at Heritage in Dallas, Texas, on November 4 th , 2017 with a pre-sale estimate of 1-1.5 million dollars. It was time to fix the hole and restore the painting to a condition befitting its new-found status.
When “Lazy Bones” arrived at Lowy, it was quite oxidized, covered with a thick, yellow
layer of natural resin varnish with heavy embedded dirt, and there were prior restorations which
had been overpainted in oils. We removed all of this, humidified the painting on a vacuum table,
and lined it with an auxiliary canvas, before re-stretching. Then, we inpainted the tears and prior
irremovable restorations, and gave it a coat of synthetic resin varnish to protect the surface from
environmental pollutants. Finally, we outfitted the painting with a 20th century American Cove
frame. 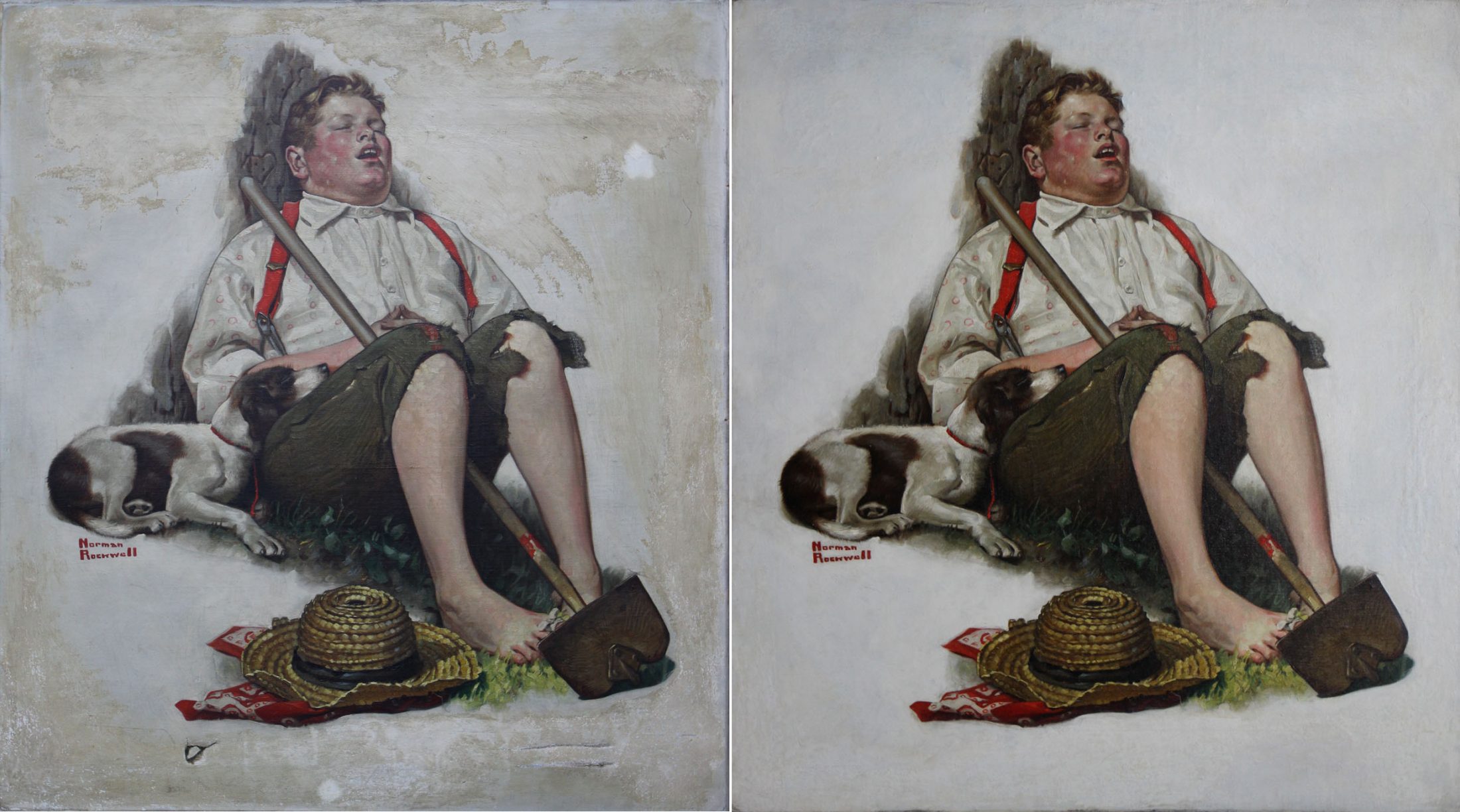 "Lazy Bones" before and after restoration
Lowy is proud to have been a part of this storied painting’s odyssey. Read the story in
the New York Times. Rockwell’s "Lazy Bones" all dressed up and ready for viewing.